Landing on the right casual wedding attire for men can feel like figuring out the answer to a particularly nasty word problem. Parsing the wardrobe suggestions of a weirdly abstract wedding dress code? Please. We’d rather do the algebra. Smart casual? Cocktail attire? Creative black tie? Give us a paragraph-long SAT prompt any day.

Mercifully, if the shindig you’re headed to is expressly billed as casual, you don’t have to worry about springing for a tuxedo, let alone the full white tie rig. (What are you, a disgraced member of the royal family trying to rehabilitate your image? The formal dress isn’t fooling anyone, you sleazeball.) Practically speaking, a lax dress code also means now’s your chance to get a little experimental. The opportunity to imbue the stuffy formalities of wedding attire with elements of your own personal style is a tragic thing to waste—provided you do it right.

So tread carefully. You don’t want to be the hapless jamoke who shows up in flip flops and a gag T-shirt and ruins all the photo ops from the big day. But you also don’t want to roll through to a beach wedding in a dinner jacket and starched white shirt when the groom is wearing a pastel polo and chinos. (FWIW: If you’re really panicking, some form of a blazer and dress pants is pretty much always a safe bet.)

To help you distinguish the semi-formal from the somewhat dressy and every impossibly frustrating permutation in between, we compiled a handy guide to casual wedding attire for men. The next time a vaguely-worded Evite is giving you anxiety don’t panic-rent a tux—turn here instead.

A spring wedding is the opportune time to bust out all the new clothing you’ve been jonesing to wear after so many months cocooned in fleece, whether it’s an oversized jacket or a jaw-dropping double-breasted suit. Skip the “fun” flourishes (zany socks are always an awful idea) and opt for an unstructured blazer—and maybe even a tie!—to stand out from the sea of swagless homies in printed camp collar shirts and skintight navy suits.

The most casual of casual affairs. On a spectrum of formality, with black tie weddings on one end and spontaneous Vegas elopements on the other, the dressed-down summer wedding falls firmly towards the latter. This is the type of wedding where showing up sober means you’re already overdressed and sticking with patent leather shoes will make you look like you took a wrong turn on the way somewhere else. You could probably get away with short sleeves at the wedding party, but best to stick with a marginally more spiffy look on the wedding day itself.

A toddler-sized step above typical beach wedding attire, updated with the fluctuating temperatures in mind. It’s fall, so no need to stick exclusively to dark colors. If the invite stipulates some sort of bastardized business casual hybrid (damn you, Rob and Melissa!), err on the side of formality but add a little edge. Think blazers in autumn-ready fabrics, or unconventional suiting that’d earn you snickers from the C-suite set.

The final boss in the casual wedding hierarchy, and your best shot yet at really letting your sartorial freak flag fly. A dark suit is appropriate provided you play down its formality—ditto a flex-worthy take on traditional formal wear. The only thing you can do wrong here is play it too safe: this is not the time to repurpose your tired, pit-stained 9 to 5 threads. Try taking a crushed velvet jacket with big, brash peak lapels out for a spin, and then pair it with nothing but a shirt buttoned all the way to the top and a neckful of pearls slung underneath the collar. 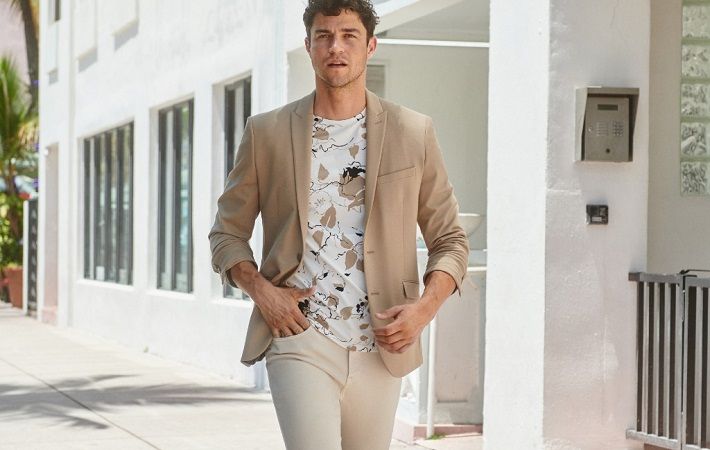